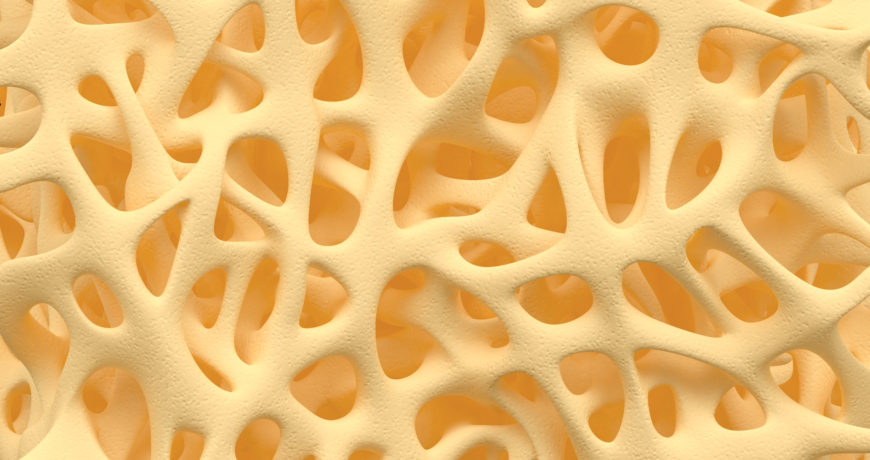 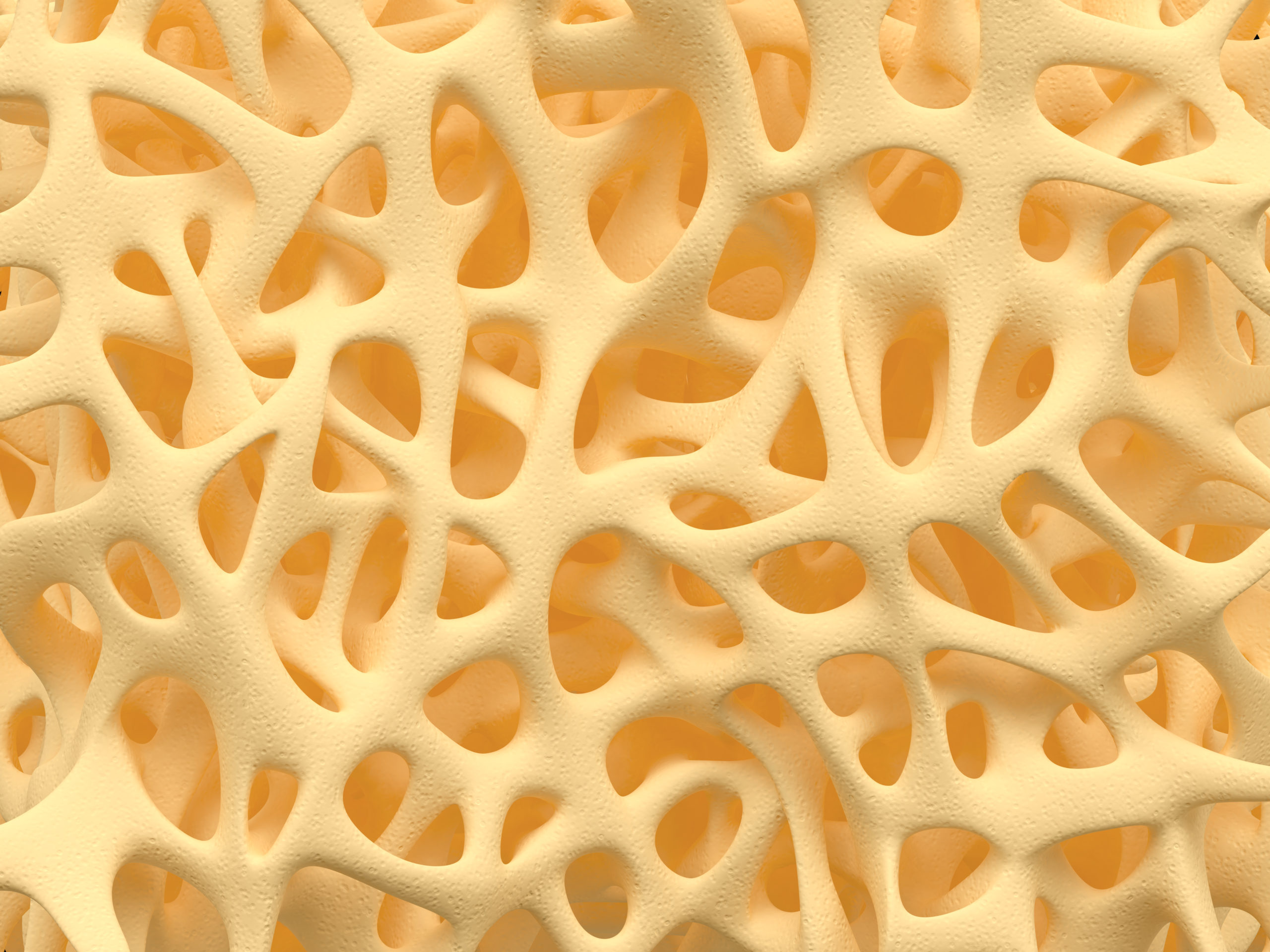 Part 1 of Calcium Dysregulation and Osteoporosis addressed osteoporosis, a degenerative bone disorder responsible for over 1.5 million fractures annually in the United States. In addition to the physiology of bone remodeling, conventional treatments for osteoporosis, and health concerns surrounding calcium supplementation, Part 1 also discussed restoration of internal calcium regulation (homeostasis) with a special emphasis on a purified, biogenic marine material – nacre – that has been shown to restore calcium metabolism and support healthy bone formation.

In Part 2 we expand on the discussion of calcium homeostasis and review examples of individuals who have benefited from supplementation with a nutritional supplement formula that combines natural nacre with traditional bone-building Chinese herbs.

The first subject, a 58-year-old female, enrolled in an early evaluation trial of an herbal nacre formula after a DEXA scan revealed osteopenia in her hips. The evaluation process involved taking 4 capsules of the herbal nacre formula daily. Eight months after the end of the evaluation – a full year after the beginning of the trial – a follow up bone scan revealed that her bone mass score had increased 6 percent (Fig. 1). 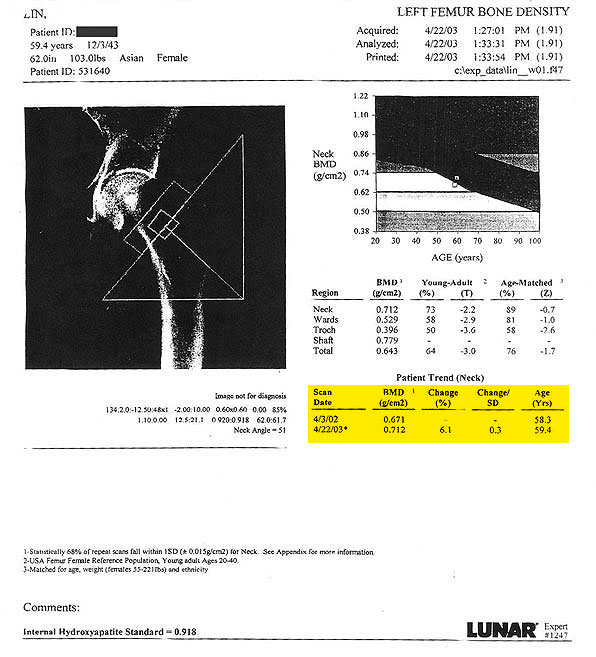 The second subject, a 56-year-old female, also took part in an early evaluation trial after an Achilles scan revealed a baseline BMD score of 69. The subject received an herbal nacre formula for a period of four months. Two months after the end of the trial a follow-up Achilles scan revealed a BMD of 75, indicating a significant 10 percent improvement in bone density levels.

Fourteen months after the end of the evaluation trial, the subject underwent a follow-up scan to measure the potential residual effects of an herbal nacre formula.

This third test revealed that her BMD had increased to 77, indicating a long-term restorative effect on calcium metabolism a full 16 months after her last dose.

Impressed with these results, the subject enrolled in a second, shorter trial to evaluate the efficacy of the herbal nacre formula in combination with another herbal formula for circulatory support.

After taking the two formulas for two months, a fourth bone density scan revealed a BMD score of 99, indicating bone density comparable to that of a healthy 30-year-old female. To confirm the test results, a second scan was ordered, this time resulting in a BMD of 100, well within the margin of error and confirmation of the previous score.

At the age of 67, Waltraud H. was bedridden with spinal fractures caused by extreme osteoporosis. The year was 1998 and a DEXA bone scan of her left hip had just revealed that her bone density was only 25 percent that of a typical woman of her age. To make matters worse, her T-score of -6.2 indicated her bone density was lower than 99 percent of all women in her age group.

In June 2005, at the age of 74, Waltraud began taking an herbal nacre formula hoping to forestall any further loss in hip bone density. Three months later, after taking 2 capsules of the herbal nacre formula twice per day, a follow-up DEXA scan revealed a 12.3 percent improvement in hip bone density. Waltraud also reported that she was feeling stronger, was walking with greater ease, and was generally able to go about her day with much less pain than before

Waltraud continued taking the herbal nacre formula at a rate of three capsules per day. One year later, at age 75, another DEXA test scan indicated a significant gain, revealing an additional 22.4 percent increase in hipbone density. During this period Waltraud’s T-score also improved by 0.8 points.

Currently Waltraud retains 50 percent of the bone density of a woman her age, compared to seven years previously when it was down to 25 percent.

While her bones are still brittle, her recent scores reflect a significant 30 to 40 percent reduction in her risk of suffering a severe fracture, according to data from a National Osteoporosis Risk Assessment study of 200,000 postmenopausal women.

By regulating how calcium is used in the body the herbal nacre formula was able to accomplish much more than just strengthening bones, as Waltraud attests in her recent letter. While others may not experience the same results as she did, her record of significant improvements as revealed by the DEXA scans illustrate that even those with very severe osteoporosis and brittle, fracture-prone bones may benefit from daily use of this unique herbal supplement. 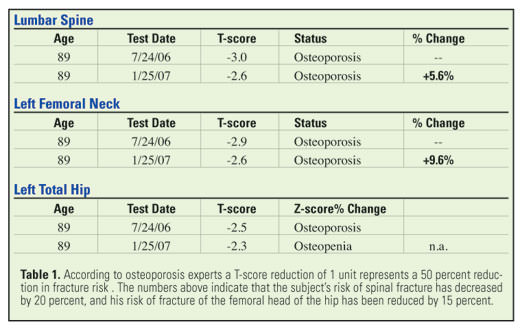 As the chart of his bone density scans shows (Table 1, above), just six months after beginning to take the herbal nacre formula his follow-up scan revealed a significant improvement of 5.6 percent in his lumbar spine and 9.6 percent in the femoral neck of his left hip bone. The radiologist reading the scan was impressed enough to add a handwritten note on the report – “marked improvement.”

The report itself indicates that he is moving out of osteoporosis towards osteopenia. We continue to receive reports of rapid improvement in bone density for elderly customers with significant bone loss [as in the case above.] It is remarkable to see such improvements for an older person with relatively healthy bone density, and very significant to see an established trend.

Steroid (glucocorticoid) drugs, such as prednisone, are well known to contribute to osteoporosis. Steroids speed up the rate at which bone is dissolved, and simultaneously slow the growth of new bone tissue, resulting in rapid and devastating bone loss. An average of 5% of bone mass is lost in the first year of steroid use. Consequently, fracture rates among patients on long-term steroid therapy range from 30-50%.