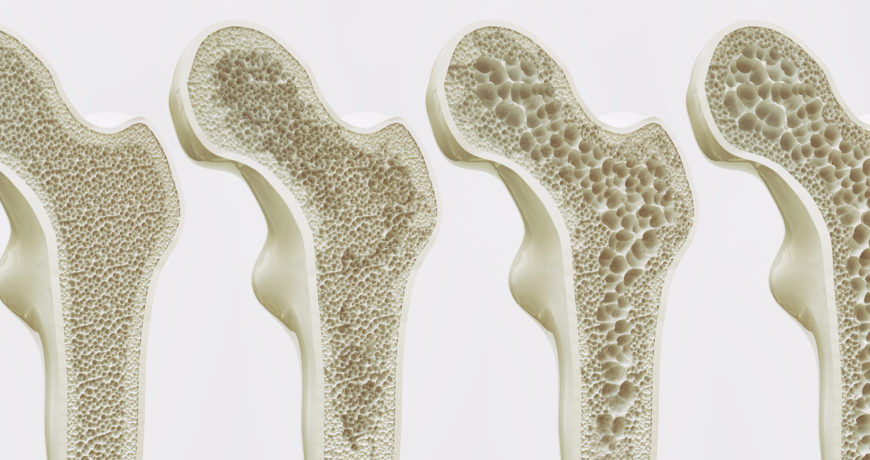 Osteoporosis is a degenerative bone disease affecting an estimated 10 million people in the United States. An additional 34 million people with osteopenia (low bone mass) are at risk of developing osteoporosis.

Osteoporosis directly contributes to over 1.5 million fractures each year, and 50 percent of all women will experience an osteoporosis-related fracture in their lifetime. Most osteoporosis-related fractures occur in the hips, spine, and wrist. Hip fractures are the most serious, with 25 percent of all patients over 50 dying within one year of a hip fracture. Of those who survive hip fracture, only 15 percent will regain enough mobility to walk across a room unaided within a year.

Bone is living tissue that is continually renewed in a process called remodeling. Bone remodeling utilizes two specialized bone cells – osteoclasts and osteoblasts – that work together to dissolve old, weakened bone and replace it with new, strong tissue. Osteoclasts begin the remodeling process by secreting an acid-like substance that dissolves old bone, leaving behind a series of small pits or cavities. This process, called resorption, results in the release of calcium into the blood where it becomes available for use in other metabolic processes. In the next stage of remodeling osteoblasts move in and fill the cavities with a Type 1 collagen mixture called osteoid. In the final stage – ossification – the osteoid mixture reacts with ions of calcium, magnesium and phosphate to harden into bone. 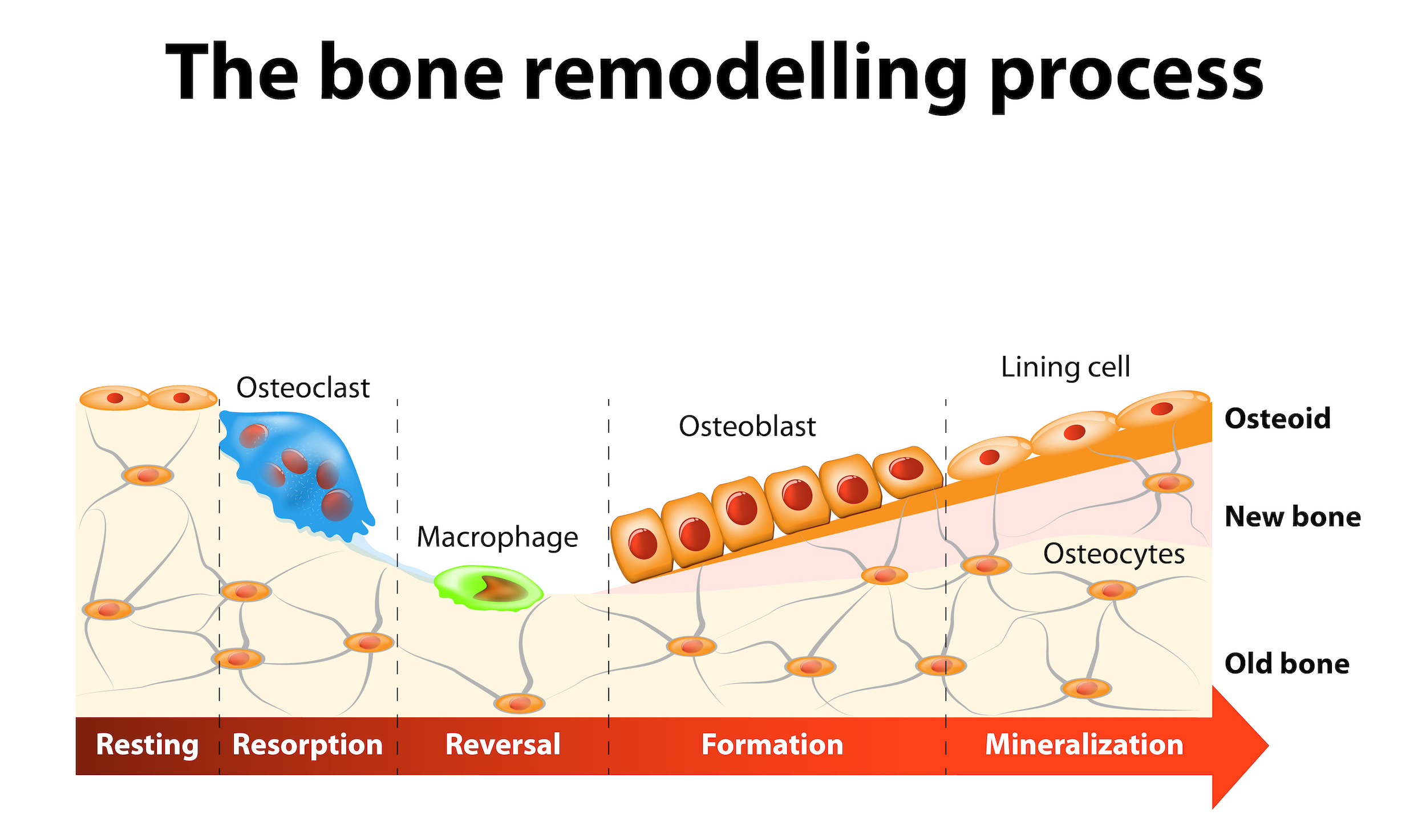 The bones of the body fall into four general categories: long bones, short bones, flat bones, and irregular bones. Long bones are longer than they are wide and work as levers. The bones of the upper and lower extremities (i.e., humerus, tibia, femur, ulna, metacarpals, etc.) are of this type. Short bones are short, cube-shaped, and found in the wrists and ankles. Flat bones have broad surfaces for protection of organs and attachment of muscles (ex. ribs, cranial bones, bones of shoulder girdle). Irregular bones are all others that do not fall into the previous categories. They have varied shapes, sizes, and surface features, and include the bones of the vertebrae and a few in the skull.

Bones are composed of tissue that may take one of two forms: spongy, or cancellous bone, and compact, or dense bone (Fig. 1). Most bones contain both types of tissue. Spongy bone occurs in most bones and combines low density and low strength with very high surface area, making it very porous. Spongy bone is found inside all compact bones and composes most of the tissue of the spine, vertebrae and ends of long bones. The rest of the long bones consist of dense, hard compact tissue, which forms the protective exterior portion of all bones. Bone remodeling is most active in spongy bone–every year about 40 percent of spongy bone is renewed, versus only 10 percent for compact bone.

Bone remodeling depends on the body’s ability to maintain a delicate equilibrium between bone destruction and replacement. If the opposing actions of osteoclasts and osteoblasts are disrupted, as is the case with osteoporosis, bone-rebuilding is impaired. In the case of osteoporosis, disruption of bone remodeling is greatest in spongy bone, which explains why most osteoporotic fractures occur in the vertebrae of the spine, the neck of the femoral bone at the hip, and the ends of long bones, such as the wrist.

Conventional treatment for osteoporosis includes the use of hormones and prescription drugs. Hormone therapy has recently been shown to increase the risk of heart attack, stroke, blood clots and invasive breast cancer. Prescription drugs, particularly bisphosphonates, are also accompanied by side effects that range from mild gastrointestinal upset to musculoskeletal pain, heartburn and esophageal irritation. Additionally, some bisphosphonates have been implicated in osteonecrosis of the jaw, a disorder involving severe bone loss due to impaired blood circulation to bone tissues.

As an alternative to conventional drug therapies, many practitioners recommend intake of extra calcium, supported by supplemental magnesium, boron, and vitamin D.

While each of these nutrients play a role in supporting normal bone remodeling in the healthy, they don’t adequately address the underlying disorder–the disruption of calcium regulatory mechanisms.

In addition to building strong bones, calcium is an essential nutrient required for a variety of critical metabolic, cellular and organ functions. Calcium is essential for chemical signaling within cells, promoting transmission of nerve impulses and inducing muscle contractions. Calcium also initiates blood clotting, participates as a cofactor for enzymes and hormones, and regulates cellular proliferation and maturation.

Due to its importance the body tightly regulates calcium to maintain levels within a narrow, physiologically safe range. To accomplish this numerous specialized molecules and subcellular structures are involved in maintaining optimal calcium levels.

As a consequence, calcium is in constant motion, entering and exiting cells as it is recycled, redirected, stored and re-released from countless sites in bones, blood, organ tissues and cellular fluids.

The Problem with Calcium Supplements

Despite popular claims to the contrary, calcium supplements offer very little benefit for preventing fractures in the elderly according to a major study published in the British Medical Journal (BMJ). In their report on the RECORD trial, a randomized study involving more than 5,000 persons over the age of 70, the researchers failed to find any significant effects from daily supplements of 1,000 mg calcium and/or 800 i.u. vitamin D3. The main aim of the study was to examine the incidence of bone fractures due to osteoporosis, but they also looked at mortality, frequency of falling and quality of life. The RECORD study spanned from two to five years.

In an accompanying article in the medical journal Lancet, Dr. Philip Sambrook (Royal North Shore Hospital, Sydney, Australia) noted, “The RECORD study, a large randomized trial of participants with a recent low-trauma fracture, failed to show any benefit of calcium or vitamin D on fracture. We were a little surprised by our findings because, based on evidence available, the most likely finding was that the combination of calcium and vitamin D would prevent fractures. However, we didn’t find this to be the case. A better understanding of the underlying processes at work is needed.”

These findings support the research of Kenneth McLeod, chair of the bioengineering department at Binghamton University, England.

According to McLeod, calcium supplements are insufficient for triggering the growth of new bone in osteoporosis patients. As a leading researcher in the field of tissue development, healing and adaptation, McLeod’s research highlights the limits of a dietary approach to osteoporosis.

McLeod argues that it is time to give up fractured approaches to studying osteoporosis and recognize that the loss of bone mass is a natural, adaptive response to systemic changes in the body.

A better approach for avoiding or reversing the devastating effects of osteoporosis should draw upon our understanding of what is really going on in the body to allow better targeting of the mechanisms involved in bone loss. This is the rationale behind the development of modern bone-support formulations based on nacre, the lustrous prismatic layer of mollusk shells that is also known as Mother of Pearl. 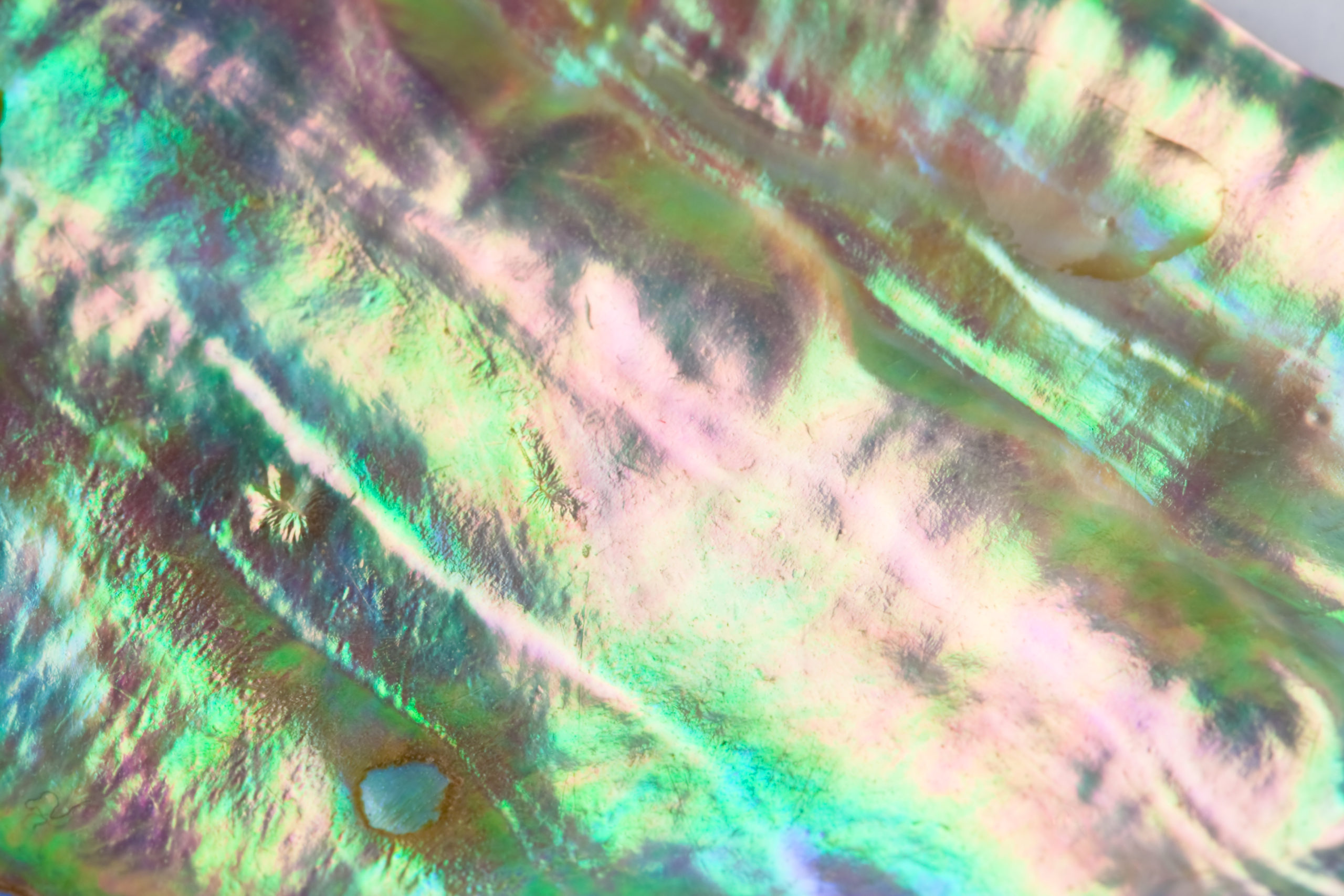 Extensive research into the biology of nacre has revealed a fascinating composite biogenic material consisting of a matrix that comines proteins, glycoproteins and chitin to form a substance with the mechanical strength of modern ceramics plus a high degree of elasticity to reduce brittleness.

By 1992 researchers had discovered that, when implanted into human bone tissue, nacre promoted the formation of osteoblasts (bone forming cells) and stimulated the formation of new bone tissues (osteogenesis). Based on this finding, by 1992 nacre from the marine oysterPinctada maxima was being successfully used as a biomaterial in oral surgery.

In 2001 researchers at the Laboratoire de Physiologie Generale in Paris began experimenting with a water-soluble matrix (WSM) of nacre obtained from the inner shell layer of Pinctada maxima.

By 2003 a second group of researchers in Paris were conducting new tests of water-soluble matrix (WSM) on pre-osteoblast mouse cells. Their study revealed that WSM stimulated osteoblast differentiation and mineralization in a third of the time normally required for cells grown in mineralizing media, demonstrating that the nacre water-soluble matrix enhanced and sped up the mineralization processes involved in normal bone growth.

A breakthrough occurred in 2004 when researchers from the Institute of Marine Biotechnology in Beijing finally announced that they had succeeded in identifying and characterizing the pivotal calcium metabolism regulator involved in regulating calcium uptake, transport and secretion in oyster nacre.

Building on their discovery, the Marine Biotechnology team developed a proprietary process for extracting and purifying these bioactive agents and blending them with ionic calcium and traditional herbs.

Initial research has shown that this unique nacre-based formula supports healthy calcium balance (homeostasis) by aiding the body in restoring normal bone density and normalizing (reducing) calcium levels in the blood and soft tissues. These physiological effects are validated by independent studies of the herbal ingredients contained in the formula.

Next: Calcium Dysregulation and Osteoporosis, Part 2: Clinical Benefits of herbal nacre formulas for Glucocorticoid-Induced Osteoporosis and Avascular Necrosis of the Hip.