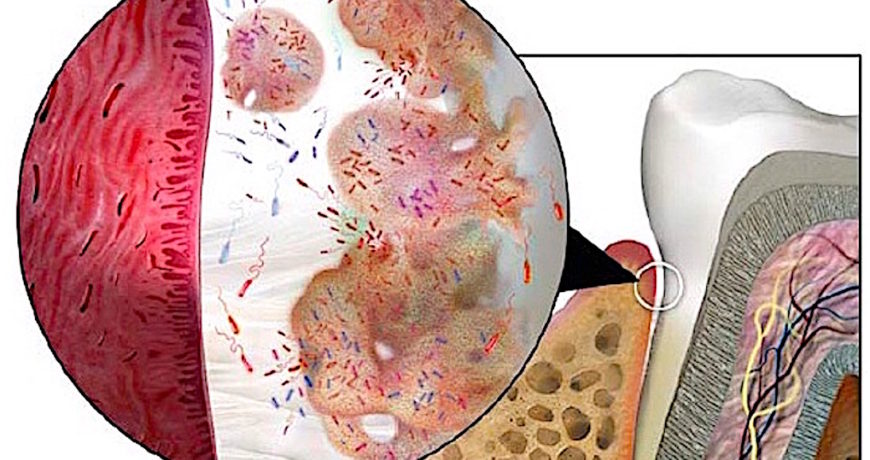 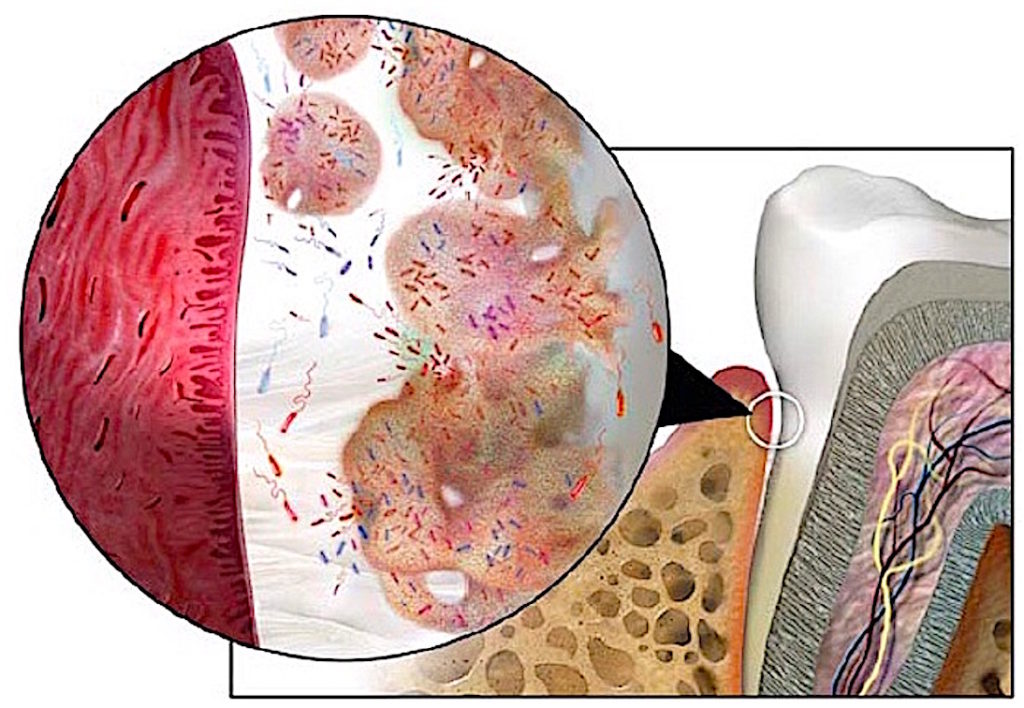 Periodontal disease is a chronic inflammatory disorder that occurs when gum tissues pull away from the teeth, allowing bacteria to accumulate and triggering an inflammatory reaction that results in the loss of bone tissues and teeth. Advanced gum disease is a serious problem that affects an estimated 47 percent of American adults over the age of 30, and 70 percent of adults over the age of 65.

In addition to causing pain and embarrassment, gum disease is now linked to a number of chronic inflammatory disorders arising from the growth of bacterial colonies in the mouth, including heart disease, diabetes, prostatitis, rheumatoid arthritis and chronic obstructive pulmonary disease (COPD).

Gum disease starts when bacteria gather to form a “biofilm” that coats tooth surfaces at or below the gum line. These bacteria emit toxins that cause the body to mount an inflammatory response that begins to eat away at gum tissues, leading to gingivitis. Eventually, if the source of inflammation is not brought under control, the process results in the destruction of supportive bone structures (alveolar bone) that are needed to firmly anchor teeth in place. As these retaining tissues break down, once-firm teeth become loose, leading to increasing inflammation, loss of bone and eventually requiring extraction.

Loss of alveolar jaw bone is a localized form of osteoporosis, and supplements that support bone and gum growth can aid in restoring healthy alveolar bone to firmly anchor the teeth to prevent tooth loss and aid in chewing.

Over the centuries traditional doctors in China developed a number of herbal formulas to promote bone healing in fractures.

Referred to as “bone-knitting herbs,” these specialized formulas were given to speed up bone healing in fractures resulting from farm work, martial arts training, wars and construction work.

Modern researchers have identified the physiological actions by which traditional bone-knitting herbs work to rebuild bone tissues. Over time a large body of contemporary research has focused on one particular herb that is particularly effective at restoring bone loss arising from periodontal disease. The herb, Drynaria fortunei, is referred to in China as GuSuiBu, literally meaning “mend broken bones.”

Early scientific research on Drynaria focused on its ability to rebuild healthy bone to reverse the effects of osteoporosis.

Bone building, called remodeling, requires maintaining a careful balancing act between the destruction of weak, old bone (resorption) and the manufacturing of new, healthy bone (regeneration). When old bone is broken down at a faster rate than new bone is created, the result is osteoporosis.

Drynaria has been shown to improve bone rebuilding in several examples of excessive bone loss.

Impressed with the growing body of studies supporting Drynaria’s role in rebuilding healthy bone, researchers began to examine its application in periodontal disease, where bacterial proliferation and inflammation contribute to the destruction of gum tissues and underlying alveolar bone.

One group of scientists has investigated Drynaria to determine if it could counter alveolar bone loss caused by E. Coli bacteria. Their study revealed that the herb suppressed bone resorption and promoted bone regeneration.

Additional studies have shown improved alveolar bone growth. In a paper published in 2011, scientists reported that Drynaria enhanced differentiation of osteoblastic cells, resulting in the growth of new, non-calcified bone-like matrix at the base of a tooth. In their summary the scientists concluded that Drynaria could be a supplementary medicine for periodontal therapy based on its ability to reduce alveolar bone resorption while supporting the bone-building effects of osteoblasts.

The periodontal ligament is a structure within the gums that helps bind the teeth to the underlying bone. However, this ligament also produces cells that become bone tissue, so it’s importance in dental health is extremely significant. In 2010 researchers used an electron microscope to reveal that naringin, one of the active ingredients in Drynaria, actively stimulates protein synthesis and metabolism of human periodontal ligament cells.

Because the periodontal ligament not only serves as structural support for the teeth, but also as a source for regenerating bone tissue, reversing destruction of these ligaments during gum loss is central to halting and repairing periodontal disease.

Combined with other herbs in a synergistically balanced formula, such as GingiPhase, Dyrnaria can support optimal periodontal health while addressing a wide range of disorders known to interact with, and contribute to, periodontal disease.