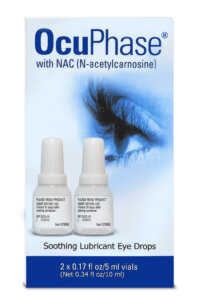 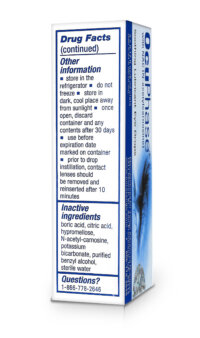 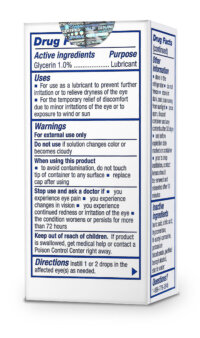 Suggested Use: For general preventive use, the recommended amount is 1–2 drops daily. Those with eye problems may want to use 2 drops twice daily or as needed.

Each package contains two resealable vials containing a total of about 200 drops, which allows for only a small amount of product to be exposed to oxygen at a time. Unopened vials can be stored in the refrigerator to extend shelf life.

Good nutrition is a key element of preventing numerous age-related issues, including the health of our eyes. As we age our eyes become more susceptible to a host of challenges that can lead to irritation, discomfort and changes to vision. Colors may be dulled or distorted, and there may be an annoying halo of light around bright objects, causing a glare effect.

Applying lubricating eye drops several times a day can help to alleviate discomfort. Additionally, a number of nutrients have been shown to benefit eye health and good vision. One of these, carnosine, is a dipeptide consisting of two amino acids (alanine and histidine) connected by a chemical bond. Based on research performed mainly by Russian scientists, it is believed that carnosine’s antioxidant properties support healthy vision by inhibiting a chemical process called glycation.

Glycation leads to deleterious chemical complexes called AGEs (advanced glycation end products) that result from common but undesirable reactions between blood sugars, such as glucose, and proteins in many parts of our bodies, including the lenses of our eyes. The sugar-protein complexes become chemically cross-linked and degrade cellular functions. The aptly named AGEs are thought to be an important factor in the aging process.

Carnosine eye drops have been shown to aid in delaying vision senescence in humans by restoring the natural structure of proteins in the lens.

N-acetylcarnosine (NAC), like its parent compound, carnosine, occurs naturally throughout the human body. Both compounds are found primarily in the heart and skeletal muscles (the word carnosine is derived from the Latin word for flesh) and in the brain. Carnosine was discovered in 1900 in Russia, and it is in Russia that most of the recent research on the N-acetylcarnosine derivative has been carried out. Research with N-acetylcarnosine, as with carnosine, demonstrates that it is effective for improving transmissivity of light through the lens.

This means that N-acetylcarnosine may pass through the lipid membranes of the corneal and lens cells more easily than carnosine, and may thereby gain access more readily to the cells interior, which is primarily aqueous. There, the N-acetylcarnosine is gradually broken down to carnosine (and, perhaps, to histidine), which then exerts its beneficial effects.

Carnosine and N-acetylcarnosine eye drops appear to be a safe, effective means for supporting eye health, comfort and quality of vision in aging humans.

* These statements have not been evaluated by the Food and Drug Administration. This product is not intended to diagnose, treat, cure, or prevent any disease.
SKU: OCU5 Categories: Herbal Supplements, Tango Tags: Glycerin, hydroxypropylmethylcellulose, N-acetylcarnosine, NAC

What is the recommended daily use of OcuPhase?

For general preventive use, the recommended amount is 1–2 drops daily. Those with eye problems may want to use 2 drops twice daily or as needed.

OcuPhase eyedrops are not recommended for children under the age of 12 years.

What if I experience any discomfort when using OcuPhase eyedrops?

If the eye tissue becomes more inflamed, red, irritated or uncomfortable after using this product, immediately discontinue the use of product and consult an eye physician if necessary.