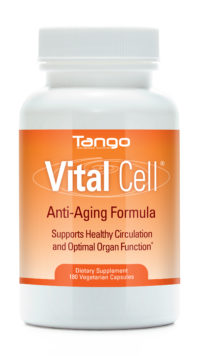 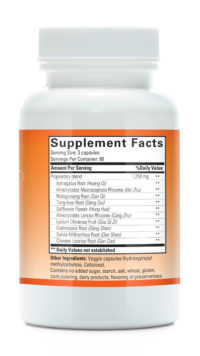 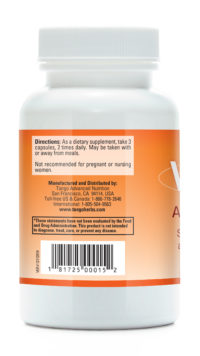 Vital Cell is a proprietary blend of herbal extracts formulated to support healthy blood flow. The formula has been shown to exert a positive effect on blood, supporting healthy oxygen uptake and delivery.

In addition to benefits in microcirculation, Vital Cell has been shown to help with certain age-related issues, as well as helping to maintain and support healthy immune response. Traditional herbal remedies like Vital Cell are known to confer a wide range of anti-aging and immuno-supportive health benefits. In addition to lacking the negative side effects of synthetic remedies, advanced herbal formulas like Vital Cell may be inherently safer and less expensive than their synthetic counterparts.

The Connection Between Blood and Aging

As a professor and physician, Dr. Yan received extensive training in both Western and Traditional Chinese Medicine (TCM). In Chinese medicine blood stagnation is considered to be the primary underlying cause of many health issues. When blood stagnation occurs, the body’s internal organs don’t receive their normal nutrients, and waste products aren’t carried away at a sufficient rate. This impedes the organs from performing their functions, resulting in weakness and aging.

Dr. Yan recognized that the Chinese view of blood stagnation had a strong corollary in Western medicine – especially regarding blood sugar issues that affect the microcapillaries and impact blood flow to the retinas, kidneys, and peripheral nerves. Basically, this can be viewed of as an accelerated form of the normal aging process in the way it relates to blood composition and circulatory issues.

Noting the role that changes in circulation play in aging, Dr. Yan theorized that many of the age-related health issues he observed in his older patients might be traced to underlying blood and circulation issues. He also believed that these issues were affecting vital tissues and organs.

Dr. Yan formed a new research team with other leading medical researchers at the Shanghai Medical Hospital called the Blood Stasis and Aging Research Group. As the researchers examined blood samples from young and elderly volunteers they quickly noticed that the samples from young adults were thinner and had a brighter red color than the samples from the older adults. Intrigued by this simple visual correlation between blood stagnation and aging, the researchers began to test the beneficial effects of a number of natural herbs on blood and microcapillary function.

After eight years of gathering clinical data on microcirculation and evaluating changes in blood flow, Dr. Yan’s team arrived at a formula made up of 10 traditional herbs that were shown to promote overall health, enhance energy, and maintain healthy circulation.

My clinical experience supports the use of this unique Traditional Chinese herbal formulation based on its ability to significantly promote healthy internal organ function, as well as systemic microcirculation, detoxification and cellular energy production. Vital Cell has also been shown to maintain ideal viscosity (thickness) of the blood, thereby supporting blood flow through the capillary vessels that supply oxygen and nutrients to and remove waste products from the cells, tissues and organ systems.

I have personally been taking Vital Cell for over four months and have observed a definitive, gradual promotion of my stamina and endurance. Another noticeable benefit has been in my clarity and sharpness of vision and memory, especially after long hours of studying complicated, homeopathic cases and all the medical literature.

Astragalus has been used in Traditional Chinese culture for thousands of years, often in combination with other herbs, to strengthen the body. Astragalus has been found to slow formation of advanced glycation end products (AGEs) (1) and support learning and memory (2). Additionally, astragulus has been shown to aid in modulating insulin signaling in skeletal muscle. (3)

Atractylodes (Rhizoma Atractylodis Macrocephalae)
Atractylodes is an herb that has been used in Chinese herbal culture for centuries. Researchers have demonstrated significant inflammation-modulating activity of components extracted from Atractylodis macrocephalae in a study of mice suffering from ear edema. (4) In a related study , components in atractylodes (atractylenolide I and atractylenolide III) were found to exert inflammation-modulating effects by modulating production of TNF-alpha and NO. (5)

Safflower flower (Flos Carthami Tinctorii)
Hydroxysafflor yellow A (HSYA), a component of Safflower flower, has been shown to exert inflammation-modulating effects on cytokine expression to support lung health. (10) In another study Safflower flower was shown to potentially serve as a cardio-protective agent. (11)

Codonopsis (Radix Codonopsis Pilosulae)
Codonopsis extract has been shown to support liver health by modulating phosphorylation of AMPKalpha and ACC, which are implicated in lipid metabolism. (14)