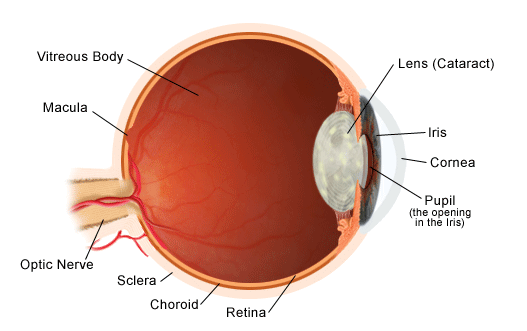 Cataracts are the leading cause of blindness, accounting for about 42 percent of all cases of blindness worldwide (affecting about 17 million people). Twenty-eight thousand new cases are reported everyday. About 20 percent of all people over 60 have at least the beginning of a cataract in one or both eyes, and that figure rises to 80 percent for people over 75.

The most common type of cataract – a nuclear cataract – is characterized by a blurry haze inside the lens. This haze is the physical manifestation of a random clumping together of the once beautifully ordered arrangement of lens proteins called crystallins. As the cataract develops in size and density, it reduces the amount of light that passes through the lens and scatters the light that does get through. Thus, instead of all the light rays being focused precisely to a point on the retina, forming a sharp, clear image of what we are seeing, many of the rays are spread out across the retina, forming a fuzzy image. Colors may be dulled or distorted, and there may be an annoying halo of light around bright objects, causing a glare effect.

Causes of cataracts include cumulative ultraviolet radiation damage from sun exposure, heredity, poor nutrition, smoking, high blood pressure, kidney disease, diabetes, and the long-term use of corticosteroids (the last two are major risk factors for cataracts). Oxidative free radicals produced by the above-listed causes are thought to damage vital biomolecules, including lipids and proteins, resulting in the clumping together of these proteins. The antidote to free radicals, of course, is antioxidants, such as glutathione, lipoic acid, and vitamins C and E. Consequently, many scientists believe that abundant consumption of antioxidants may delay the onset of cataracts.

Good nutrition is a key element of effective prevention for most age-related diseases, and cataracts are no exception. A number of nutrients can benefit our eyes, and may help prevent diseases such as cataracts, glaucoma, and macular degeneration. These nutrients include the tripeptide glutathione (the most abundant and important antioxidant in the human body, critical for protecting the lens from free radical damage); vitamins A and C; vitamin E and some of the B vitamins; various bioflavonoids (especially quercetin and hesperidin) and carotenoids (especially lutein and zeaxanthin); the amino acids taurine, N-acetylcysteine (a precursor of glutathione), and acetyl L-carnitine; the hormone melatonin; the alkaloid vinpocetine; the herbs bilberry, ginkgo, and garlic; the minerals zinc and selenium; and, last but certainly not least, the saturated fatty acid, lipoic acid (“the antioxidant’s antioxidant”), which plays a central role in maintaining the body’s antioxidant network.1

Carnosine – a dipeptide consisting of two amino acids (alanine and histidine) connected to each other by a chemical bond called the peptide bond – is one of the most exciting anti-aging nutrients that has recently become widely available.2  Based on research performed mainly by Russian scientists, it is believed that carnosine is effective both in preventing and treating cataracts. 3-6

The ability of carnosine to prevent and treat cataracts is believed to be due to its antioxidant properties and its ability to inhibit a chemical process called glycation.

Glycation leads to deleterious substances called AGEs (advanced glycation end products). AGEs are chemical complexes that result from common but undesirable reactions between blood sugars, such as glucose, and proteins in many parts of our bodies, including the lenses of our eyes. The sugar-protein complexes become chemically cross-linked and degrade cellular functions. The aptly named AGEs are thought to be an important factor in the aging process.

Carnosine-containing eye drops have demonstrated efficacy in treating a variety of ophthalmic conditions, including corneal diseases, cataracts, glaucoma, and increased intraocular pressure. In 1997, clinical trials with carnosine-containing eye drops were conducted on 109 ophthalmic patients. The results confirmed accelerated healing of corneal erosions, trophic keratitis, post-herpetic epitheliopathy, primary and secondary corneal dystrophy, and bullous keratopathy.7 Most striking, however, was the ability of carnosine to eliminate existing cataracts.8

Scientists concluded that “carnosine seems to delay the impairment of eyesight with aging, effectively preventing and treating senile cataract and other age-related diseases.”9 Carnosine actually restores the proteins in the lens by removing cross-linked carbonyl groups, and is thought to function as a “molecular water pump,” thereby also helping to lower intraocular pressure.10 In earlier experiments it was demonstrated that applying carnosine to the conjunctiva (the membrane covering the eye) caused a decrease in normal intra-ocular pressure and reduced prostaglandin-induced ocular hypertension (related to glaucoma) in rabbits.11

Some scientists believe that carnosine is ineffective if it is metabolized (broken down) by the enzyme, carnosinase. However, studies of corneal transplants in rabbits that were treated with one of the metabolites of carnosine, histidine, indicates that the metabolite itself may be bioactive. Five percent histidine ointment was applied twice daily to 6 transplants for two months. All six transplants healed and were clear. On the other hand, transplants which were treated with daily applications of one percent cortisone became opaque, necrotic, and failed to heal. Likewise, transplantation failed completely in six control eyes.12  This indicates that histidine may be an active portion – if not the active factor – of the carnosine molecule.

N-acetylcarnosine (NAC), like its parent compound, carnosine, occurs naturally throughout the human body. Both compounds are found primarily in the heart and skeletal muscles (the word carnosine is derived from the Latin word for flesh) and in the brain. Carnosine was discovered in 1900 in Russia, and it is in Russia that most of the recent research on the N-acetylcarnosine derivative has been carried out.13-15  Research with N-acetylcarnosine, as with carnosine, demonstrates that it is effective not only in preventing cataracts but also in treating them. NAC has been shown to improve vision by partially reversing the development of the cataract, thus increasing the transmissivity of the lens to light.

This means that N-acetylcarnosine may pass through the lipid membranes of the corneal and lens cells more easily than carnosine, and may thereby gain access more readily to the cells’ interior, which is primarily aqueous. There, the N-acetylcarnosine is gradually broken down to carnosine (and, perhaps, to histidine), which then exerts its beneficial effects.

In one study, Russian scientists conducted two randomized, double-blind, placebo-controlled trials of 6-months and 24-months duration, with eye drops consisting of a one percent aqueous solution of NAC administered as two drops twice daily.16 They treated a total of 49 elderly patients (average age 65) with cataracts ranging in severity from minimal to advanced (but not to the point of requiring surgery); the total number of eyes affected was 76. Using a variety of sophisticated optical techniques, they monitored the condition of the cataracts, visual acuity, and glare sensitivity.

Another interesting study by the same team also evaluated patients between the ages of 48 and 60, who had various degrees of eyesight impairment, but who did not have the symptoms of cataract. After a course of treatment ranging from 2 to 6 months, the conclusion was that the eye drops alleviated eye-tiredness and continued to improve eyesight (i.e. there was more clear vision). The subjects reported that the treatment “brightened” and “relaxed” their eyes. This is an important indicator that the eye drops have a value both for preventive purposes, as well as medical applications.

Carnosine and N-acetylcarnosine eye drops appear to be a safe, effective means to prevent cataracts, and to possibly even treat cataracts that are forming. Although cataract surgery is safe and highly effective, the use of topical carnosine or NAC eye drops may give many people another option.