If you’re a man in your 40s or older who suffers with occasional urinary urgency, you’ve no doubt become increasingly aware of your prostate. And even if you haven’t personally experienced any prostate issues, you probably know other men who have. If you watch TV, especially sports broadcasts, it’s hard to miss all the drug commercials populated with middle-aged men doing fun, “manly” things, only to be interrupted for an emergency trip to the “john” at the 14th tee or making an embarrassed dash up crowded grandstand stairs in a packed stadium at a key moment in the game.

As men age, prostate enlargement – or Benign Prostatic Hyperplasia (BPH) – tends to become an increasingly common issue. And while BPH is a “benign” condition, it nevertheless can lead to serious discomfort. As men enter their 40s, their physician will usually recommend two common tests to evaluate prostate health: the dreaded digital rectal exam (DRE), and a blood test for a substance called prostate-specific androgen (PSA). PSA is an important biomarker that can indicate a potential problem with excess prostate growth. And even if you are symptom-free, these tests may alert your physician to early prostate enlargement.

To appreciate the significance of an enlarged prostate it’s important to understand the basic anatomy of the male urinary tract. As urine forms in the kidneys it flows into the bladder via the ureters. As the bladder fills, its muscular walls begin to contract to force the urine through the urethra to pass out of the body.

Sitting just below the bladder, the prostate gland completely wraps itself around the urethra. Normally about the size of a walnut, all is well until the prostate begins to enlarge. As it enlarges, the prostate begins to compress the urethra, blocking normal urine flow and often turning what was once a strong stream into a mere trickle (Fig. 1). In response to the increasing resistance to urine flow, the bladder walls can become irritated and begin to thicken. This results in the bladder contracting, even when it contains very little urine, resulting in a sudden and urgent need to urinate. In time, the growing need for frequent, urgent trips to the bathroom can become increasingly frustrating, especially when trying to get a good night’s sleep – or finish a round a golf.

Over time, the bladder muscle can become so weak that it can lose its ability to completely empty itself. As a result, the residual urine remaining in the bladder can act as a reservoir that harbors bacterial growth, leading to urinary tract infections (UTIs) and more seriously, potential kidney infections.

Prostate enlargement affects an estimated 60 percent of men between the ages of 40 and 60 years, and up to 75 percent of men over age 60 (Fig. 2).(1) BPH symptoms become clinically significant in about half of these men, accounting for at least 1.7 million doctor visits per year in the United States, with estimated annual health care costs exceeding $4 billion. In addition to the costs, symptoms of BPH have been shown to have a significant negative impact on patient-reported quality of life and psychological well-being. 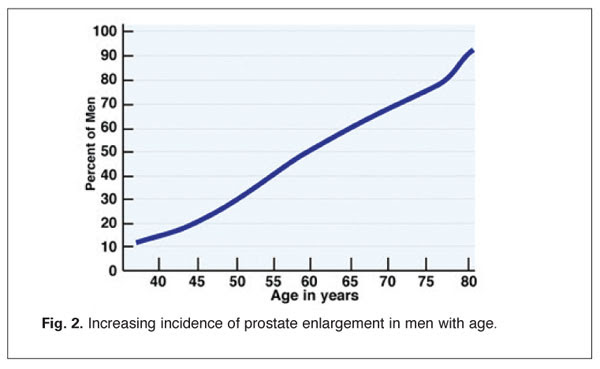 Prostate enlargement may begin as early as one’s 20s, but such growth is usually slow and symptoms of significant growth don’t usually begin to appear until a man reaches middle age or older. This has led some researchers to propose that BPH develops in two phases. In the first phase, which has no clinical signs, microscopic changes within the prostate may occur as early as the third or fourth decade of life.

The second phase, which typically begins in the fifth or sixth decade of life, is marked by macroscopic changes – i.e., prostate enlargement. However, clinical signs of the disorder manifest only if enlargement is substantial and becomes complicated by other disorders, such as prostatitis (inflammation of the prostate gland), or if the gland becomes hardened or deformed.

Epidemiologic studies have demonstrated that many of the risk factors associated with cardiovascular diseases are also associated with increased risk of BPH. These risk factors include obesity, hypertension, and diabetes. Age-related impairment of blood circulation to the prostate, caused by atherosclerosis, also plays a key role in the development of BPH. 1 And the connection between BPH and Type 2 diabetes is considered especially strong. 2-4  For example, excessive insulin levels, a primary sign of insulin resistance in Type 2 diabetes, may be a direct contributor to prostate growth.

Not all hormonal influences on BPH have been determined, but sex hormones (e.g., estrogen, testosterone, prolactin) and insulin have been shown to have such an effect. In particular, it is thought that the conversion of testosterone to dihydrotestosterone (DHT) may be a significant risk factor for BPH.

Drugs like finasteride and dutasteride, which reduce symptoms of BPH, suppress DHT production by inhibiting the enzyme 5α-reductase, which converts testosterone to DHT. These drugs also reduce male-pattern balding, an effect that is likely related to the fact that DHT is produced in the sebaceous glands.

As noted above, BPH is an extremely slow process, beginning in a man’s mid- to late 20s, but rarely showing clear symptoms until at least a quarter-century later. Symptoms tend to appear slowly and insidiously so that you probably won’t notice them until they’re pretty far along. Common symptoms of prostate enlargement include:

According to a second theory, BPH may result from the presence of excess DHT in the prostate. Some research suggests that even as blood testosterone levels decline, the prostates of some older men continue to produce high levels of DHT. Conversely, research also shows that men who do not produce DHT do not develop BPH. 5

A third possible cause for BPH is linked to “instructions” that prostate cells receive early in life. Cells in one section of the prostate are thought to follow these instructions and “reawaken” later in life; either delivering signals to other cells in the gland to make them grow, or making them more sensitive to hormones that influence growth. 5

Chronic inflammation is another factor shown to play an important role in the initiation of BPH and many other diseases. 6 Is inflammation a cause or a consequence of BPH? One analysis showed that bacterial and noninfectious chronic prostatitis could represent “inciting” factors leading to tissue hyperproliferation, possibly via the recently demonstrated antigen-presenting capacity of prostatic stromal cells, which enables them to induce and sustain intraglandular immune responses. 7

According to a major meta-analysis, chronic inflammation appears to be one of these predictive factors. The clinical studies showed a relationship between chronic prostatic inflammation and prostate volume or urinary symptoms. In microscopic studies, numerous inflammatory cells were found to be infiltrating BPH tissues.

Immune cells release cytokines and growth factors that modulate the immune response, but evidence also shows that they promote prostatic cell growth. In addition, prostatic cells themselves are able to secrete inflammatory mediators and stimulate their own growth. Once this vicious circle gets under way, it appears that feedback controls can be overwhelmed, leading to progressive increases in prostate volume. 8

Overall, recent evidence indicates that BPH is a complex disease, but one of the mechanisms leading to prostatic enlargement and urinary symptoms is chronic prostatic inflammation, thus suggesting that inflammation may be a therapeutic target for BPH.

If you follow the recommendations of the National Institutes of Health (NIH), which are strongly influenced by the pharmaceutical industry, men with BPH have a limited range of choices for treating their condition, and none of them are terribly satisfactory.

Although some studies have shown as much as a 20 percent decrease in prostate volume in up to 50 percent of men treated with 5α-reductase inhibitors, as with most drugs, this approach can be expensive and prone to side effects, including sexual dysfunction. In order to avoid these side effects, millions of men have turned to alternatives, including phytonutrients such as Serenoa repens (Saw Palmetto Berry) and Pygeum africanum (African Plum). Indeed, early clinical studies indicated that saw palmetto berry extract was helpful for relieving symptoms of BPH, and by 2006 saw palmetto was the third-highest-selling herbal dietary supplement in the U.S., after garlic and echinacea.

A growing body of modern research is beginning to help scientists better understand the underlying therapeutic mechanisms of traditional phytonutrients that have historically been used to support urinary function and prostate health. The following herbs are but a small selection of phytonutrients that have all been shown to be particularly effective for exerting beneficial effects on physiological systems (inflammation, excessive insulin, oxidative stress, etc.) that are known to contribute to prostate enlargement and BPH.

In 2008, Chinese researchers evaluated a popular traditional herbal formula containing the herbs listed above. After a treatment period lasting four weeks, the therapeutic efficacy of the formula was evaluated for improvements in frequency of night urination, degree of pain during urination, force of urinary flow, maximum flow rate, residual urine volume and prostate volume. The researchers noted that after only four weeks, residual urine volume was reduced, compared to before treatment. And while there were no obvious changes in prostate volume, the researchers found the formula to be “effective and safe for the treatment of benign prostatic hyperplasia.” 23

While each of these herbs have been shown to support some aspect of urinary function and prostate health, the traditional approach of combining specific amounts and ratios of herbs into an advanced “essence” formula can led to superior results over those of single herbs.