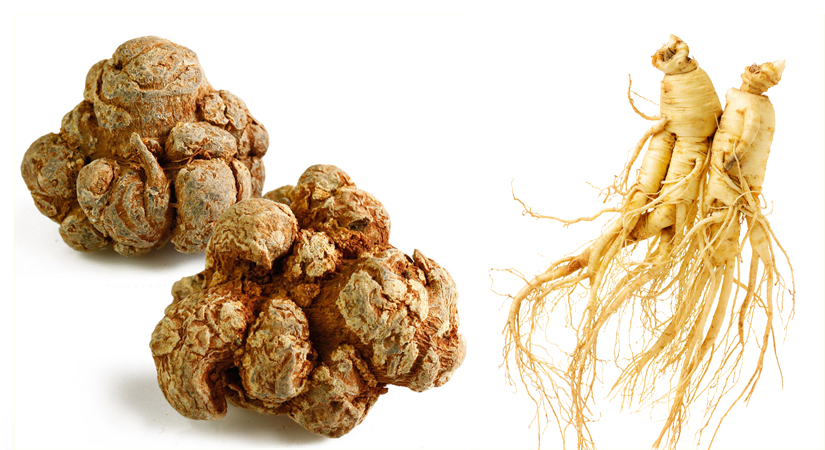 For thousands of years, health practitioners in China have relied on San Qi (also called Radix Pseudoginseng and Panax Notoginseng) to treat and support recovery from a wide range of health conditions. This traditional herb is so revered that the 1578 Compendium of Materia Medica (the most complete and comprehensive medical book ever written in the history of traditional Chinese medicine) referred to San Qi as “more precious than gold.”

While many varieties of ginseng (including Korean, Siberian, American etc.) have made their way into public awareness, San Qi (top image, left) remains a hidden treasure, delivering a multitude of crucial health benefits and disease-fighting actions.

San Qi contains an abundance of beneficial phytochemicals, including the key active ingredients common to all forms of ginseng – polysaccharides, dencichine (a special amino acid), and saponins. The most effective compounds found in San Qi are four unique saponins, referred to as Panax Notoginseng Saponins (PNS). These include:

This combination of powerful health compounds, unique to San Qi, are the basis for its ability to exert a wide range of important benefits, especially for the cardiovascular and central nervous systems.

San Qi is widely recognized for its beneficial impact on cardiovascular health, particularly for its ability to improve circulation and microcirculation. The herb has been used traditionally throughout China to treat and help prevent heart disease, and modern science has solidly confirmed its efficacy and safety profile.

In a comprehensive scientific review published in 2017 researchers looked at dozens of clinical trials where San Qi (or its constituents) were used to treat potentially deadly coronary artery disease with a goal of learning the keys to its effectiveness.1  They learned that this herb works in a variety of ways that all contribute to improved cardiovascular health, even in the face of severe disease. San Qi’s cardioprotective mechanisms of action include:

These actions can make an enormous difference in patient outcomes. For example, in one clinical trial, 60 patients with coronary artery disease (CAD) were given either conventional therapy, or conventional therapy plus PNS (panax notoginseng saponins) for three months.2  The patients taking PNS had a substantially lower rehospitalization rate – three times lower – than the conventional-therapy-only group. Another trial that included 600 CAD patients revealed that patients getting PNS had reduced risk of cardiac death and heart attack.3

Every cell in the body relies on tiny organelles called mitochondria for their power supplies. These tiny power plants use glucose and oxygen to create ATP (adenosine triphosphate), the form of energy that fuels every part of the body – especially the heart. In fact, heart muscle cells (cardiomyocytes) contain the highest concentration of mitochondria, with nearly 5,000 of these microscopic powerhouses packed in each cell, providing critical energy for the hardest working organ in the body.

Mitochondria are particularly susceptible to damage, particularly from free radicals created as a by-product of their energy production. This process naturally generates free radicals that, left unchecked, can wreak damage on mitochondria and the cells they inhabit. Even minor damage to mitochondria can lead to dysfunction and disabling or deadly cardiovascular diseases. Dozens of studies link mitochondrial dysfunction with various forms of cardiovascular damage – from the premature death of cardiomyocytes to atherosclerosis to heart failure.8,9,10

Mitochondria also play a crucial role in brain health: the brain consumes nearly 25% of the body’s energy, leaving brain cells especially vulnerable to mitochondrial dysfunction. That’s why virtually every brain-related condition, from Alzheimer’s disease to depression to autism, can be tied back to malfunctioning mitochondria and reduced ATP production.11

These tiny organelles are so fragile, and so important, that scientists have spent more than 20 years12 trying to develop pharmaceuticals that target and support mitochondria as well as San Qi does naturally. To date all of their efforts have come up short.

According to a 2017 study, PNS (panax notoginseng saponins) found in San Qi helps get to the root cause of many cardiovascular disease conditions (including hypertension and thrombosis) by regulating mitochondrial function.

It does that in several key ways, such as regulating energy metabolism, reducing oxidative stress, managing natural cell death, and improving the clearing and recycling of damaged components (mitophagy).13

New cutting-edge research shows that San Qi helps reduce cardiomyocyte death by improving mitochondrial function. For six months, aging rats were given either PNS or a placebo. Afterward, researchers evaluated their heart muscle cells and found that the PNS made a significant difference in mitochondrial function, primarily by reducing oxidative damage.14

Improving mitochondrial function can make a powerful difference for people struggling with virtually any disease, particularly those that affect the cardiovascular and central nervous systems. And it’s just one of many ways San Qi improves heart and brain health.

Like mitochondrial dysfunction, systemic inflammation plays a primary role in contributing to a wide range of diseases, disrupting normal function and affecting every part of the body. Vital organs – like the heart, lungs, brain, and liver – are highly vulnerable to damaging inflammatory compounds, and getting inflammation under control can lead to restored function and rejuvenated organs.

Scientists have identified inflammation as a root cause of coronary artery disease (CAD, also known as ischemic heart disease) and atherosclerosis (hardening and narrowing of the arteries), damaging delicate blood vessels and cutting off supplies of essential nutrients and oxygen. Cardiovascular disease and disease progression have been directly linked to specific inflammation markers, including heavy hitters like:

While there are pharmaceutical options for addressing inflammation, none of them come without substantial risk of side effects, especially with prolonged use. San Qi solves both problems, taming runaway inflammation while it improves overall health, especially with long-term use.

Additional research indicates that these inflammation-modulating effects also aid in preserving precious brain cells. Inflammation has been implicated in the creation and accumulation of amyloid beta, a primary cause of Alzheimer’s disease. A 2018 study showed that compounds in San Qi helped reduce amyloid beta toxicity, slow memory decline, and improve memory and spatial learning in a mouse model of Alzheimer’s.18

Neuroinflammation (inflammation in the brain) has also been closely linked to other neurodegenerative diseases and mood disorders, including Parkinson’s disease and depression. San Qi’s ability to reduce that inflammation helps protect brain cells – and the herb has also been shown to possess anti-anxiety, anti-depressant, and anti-insomnia effects.19

Studies show that San Qi delivers potent antioxidants that can decrease free radical levels inside platelets, protecting them from oxidative damage.20  The herb has also been shown to limit lipid peroxidation and extend the “health span” of the heart and brain with its potent anti-aging actions.21

Lipids (fats, like cholesterol and triglycerides) have been linked with cardiovascular disease, leading to top-selling pharmaceuticals designed to force lower levels. The problem: Humans need these lipids to survive and thrive (especially when it comes to brain health) but in the right balance and condition. So while it can be beneficial to get runaway lipid levels under control, pushing them too low can lead to health problems. A more effective intervention involves preventing lipid peroxidation (which can damage fragile cell membranes) and restoring a healthy lipid balance.

San Qi has been shown to lower elevated lipid levels – including total cholesterol, LDL cholesterol, and triglycerides – without bringing on the common side effects of pharmaceuticals, which include liver damage and gastrointestinal upset.22

In addition, the herb’s potent antioxidant properties appear to limit lipid peroxidation, preventing runaway cellular and tissue damage. One 2018 study showed that notoginsenoside R1, a compound unique to San Qi, could prevent damage to endothelial cells (which make up the inner lining of blood vessels) by shielding them against the destructive effects of oxidized LDL cholesterol.23

While lipid balance is most often associated with cardiovascular health, it plays a vital role in brain health as well. The brain requires cholesterol to function properly; in fact, it uses 25% of the body’s total cholesterol stores. When cholesterol levels drop too low, which is often the case with the use of pharmaceuticals, brain cells and signaling pathways can suffer, leading to cognitive decline and mood disorders. Gently lowering lipids with San Qi can achieve that “tightrope” balance, reducing blood cholesterol to healthy levels without starving the brain of this essential fat.

San Qi is a staple of traditional cardiovascular formulas. On its own, San Qi exhibits an impressive range of healing and rejuvenating properties that specifically benefit the heart and brain. And as impressive as these benefits are, San Qi is even more effective when combined with other synergistic herbs.24

Western medicine tends to prefer powerful, single ingredients that often overwhelm the body and give rise to potentially dangerous side effects. By contrast, traditional Chinese practitioners have learned to combine herbal ingredients into complex, sophisticated herbal formulas that work together to support, balance and enhance the active ingredients (even in lower doses).

Such is the case with formulas incorporating San Qi, wherein all the herbs contribute to the therapeutic efficacy and safety of the formula to support circulation and positively impact overall health and longevity.