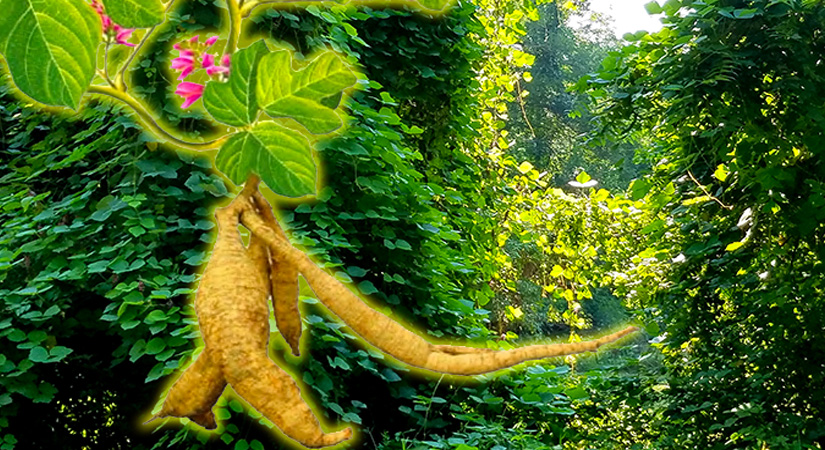 Despite its reputation as a vexing vine taking over countless backyards, Pueraria root (radix puerariae) – commonly known as kudzu – is a powerful healing herb that has traditionally been used to control blood sugar, tame inflammation, protect the heart and brain, and so much more. The unique health benefits of this quick-growing weed derive from its unique compliment of plant chemicals that have made it a staple of Traditional Chinese Medicine (TCM) for thousands of years.

In fact, pueraria root was among the earliest herbs used for medicine in ancient times, and ongoing modern research has confirmed many of its healing benefits.1 Pueraria root has traditionally been used to treat a wide range of diseases, including:2,3,4,5

Those curative powers stem from its unique combination of natural chemical compounds… and scientists are still uncovering new compounds and new healing actions.

The Power of Pueraria Root

This potent herbal remedy is packed with healing phytochemicals (plant chemicals), with the most powerful medicinal compounds concentrated in its roots. Scientists have already identified more than 70 distinct plant chemicals6 in pueraria root, and we’re just beginning to learn the true scope of their healing actions. The most vigorously studied7 phytochemicals include:

While each compound exhibits potent healing benefits — and can act as a single medicine on its own — together they work even better in their natural synergistic state. That’s why TCM practitioners have been successfully treating patients with whole pueraria root extract for generations.

Fighting the Root Cause of Diseases

Pueraria root has been shown to effectively counter two of the most significant factors contributing to premature aging and chronic age-related illnesses — inflammation and oxidative damage. Many of the phytochemicals – including puerarin – found in pueraria root combine anti-inflammatory and antioxidant actions.8 By neutralizing free radicals (the major culprits behind oxidative damage) they can aid in preventing harm to cells and organs. Plus, those plant chemicals also work together to reduce and prevent inflammation through several different pathways.

Millions of people struggle with diabetes every day. Faced with the difficult task of trying to keep blood sugar and insulin levels steady many diabetes patients end up taking two, three, or even four different medications to lower and control blood sugar.

Pueraria root extract has been shown to naturally support healthy blood sugar levels, but in a much gentler way. Unlike medications that work on a single disease factor, pueraria root acts as a multi-tasker, coming at diabetes in a few different ways for more balanced control.9 Those include:

Those actions can aid in blood sugar control, as evidenced in a clinical trial.10 Researchers recruited 54 patients with Type 2 diabetes and split them into three groups, each receiving a different dosage of pueraria root daily for twelve weeks. By the end of the trial, the researchers observed substantial improvement in three key measures:

All of the groups saw improvement, but those receiving the highest dose showed significant improvements, with up to 80% reductions in every measure.

That clinical success is backed up by several animal studies that both confirm the effectiveness of pueraria root and shed some light on the many ways it influences blood sugar levels.

In one 2014 study researchers tested the effects of kudzu root extract in a mouse model of type 2 diabetes with impressive results: After-meal sugar spikes were slashed by half for mice that got the extract. And since high after-meal sugar can be especially damaging, keeping it under control goes a long way toward preventing the complications of diabetes.11

Another study12 found that diabetic mice treated with pueraria root extract for eight months had:

Additionally, the extract didn’t have that effect on mice without diabetes. That means pueraria won’t lower blood sugar when it isn’t necessary…unlike prescription drugs, which can trigger a state of dangerously low blood sugar (hypoglycemia).

Islet of Langerhans are actually little bundles of cells that produce two sugar-regulating hormones, insulin and glucagon. Insulin helps move sugar out of your blood and into your cells where it’s converted into energy. Glucagon tells your liver to create glucose when your blood sugar levels are too low.

When islet cells are damaged (very common in type 2 diabetes) they don’t produce the right amounts of insulin or glucagon. That can make blood sugar levels run too high or too low, both of which are bad for your health – and make you feel lousy.

But puerarin – one of the most powerful and plentiful plant phytochemicals in pueraria root extract – has been shown to protect islet cells from oxidative damage. Researchers discovered that puerarin increased levels of powerful antioxidants (especially one called SOD, superoxide dismutase) inside islet cells in the lab.13 That helped reduce production of free radicals and prevent islet cell death brought on by oxidative stress.

For many women, the hormonal changes caused by menopause can send blood sugar levels soaring. But thanks to a group of focused scientists, we now know that puerarin may help.14 The researchers tested their theory on special mice models of menopause. With a standard diet, the mice gained weight and had higher blood sugar. But when puerarin was added to the mix, blood sugar levels dropped to normal levels… and weight gain was significantly reduced.

So while pueraria root keeps blood sugar under control after menopause, it can also help you avoid adding on extra pounds.

Heart disease and circulatory problems affect billions of people around the world, especially older adults. A lifetime of inflammation and oxidative damage takes a toll on delicate blood vessels and heart muscle cells, leading to:

Pueraria root helps rejuvenate the cardiovascular system – from heart muscle to blood vessels – to reduce the risk of deadly disease.

Diabetes is also closely connected with heart disease, and pueraria root has you covered there, too. A groundbreaking study found that the herb helps protect blood vessels against the harmful effects of high blood sugar. The researchers concluded that the powerful phytochemicals in pueraria root showed “immense potential and specific therapeutic value” for protecting against diabetes-related heart disease.17

Pueraria root’s anti-inflammatory and antioxidant properties also offer protection for the brain, aiding in minimizing the risk of cognitive decline and maximizing recovery after traumatic brain injuries and stroke.

Several studies have tested the herb for conditions like Alzheimer’s disease, Parkinson’s disease, and vascular dementia. Oxidative stress and inflammation play key roles in the development of memory-robbing diseases. Puerarin, along with other compounds in pueraria root, can make a difference. One study found that puerarin significantly reduced cognitive impairment in mice by decreasing oxidative damage in the brain.18 Another study found that taking puerarin improved learning and memory function by reversing oxidative stress in mice with vascular dementia.19

Then there’s post-stroke protection. In one animal study, scientists discovered that pueraria root extract protected lab rats from the effects of cerebral ischemia – a condition that cuts off blood flow to the brain and kills brain cells.20 Treatment with pueraria root was shown to:

That success led the researchers to conclude that pueraria root can protect and preserve brain cells after stroke or other injury.

Packed with an array of medicinal compounds, pueraria root addresses many of the underlying causes of chronic disease. Pueraria root extract contains powerful antioxidant and anti-inflammatory compounds that help reverse the unavoidable cellular damage caused by simply living. That’s why it’s been used for thousands of years to treat complicated conditions like diabetes and heart disease… and why it’s shaping up to be an important ally in the fight against Alzheimer’s disease and cognitive decline.

Plus, like most TCM herbs, pueraria root offers deeper healing powers when combined with other synergistic plant extracts. Experienced practitioners artfully weave carefully selected herbs into complex formulas that enhance the effectiveness of each individual component – giving you the most balanced approach to wellness.